Every secret has its price.
Anna Clark and Lia Clay were unlikely best friends in high school, their yin-and-yang personalities drawing them together in a sister-like bond. But during college, Lia inexplicably walks out on their friendship and disappears, leaving Anna hurt, confused, and disillusioned.
Twenty years later, Anna discovers a letter Lia wrote the summer after high school; a letter containing a cryptic postscript concealing a devastating truth. With her twenty-year high school reunion approaching, Anna moves closer to uncovering the secret in Lia’s letter and the devastating consequences it set in motion.
As the layers of deceit and betrayal begin to unravel, Anna is forced to question everything she believes and come to terms with what it means to forgive the one person who hurt her in the worst way imaginable.

When it comes to cycling, I love to feel the sun on my skin and the wind in my hair, and I relish the exhilarating thrill of a fast and furious downhill after a long, arduous climb. But as a fair weather cyclist, even mild winter conditions is enough for me to give outdoor riding the cold shoulder. 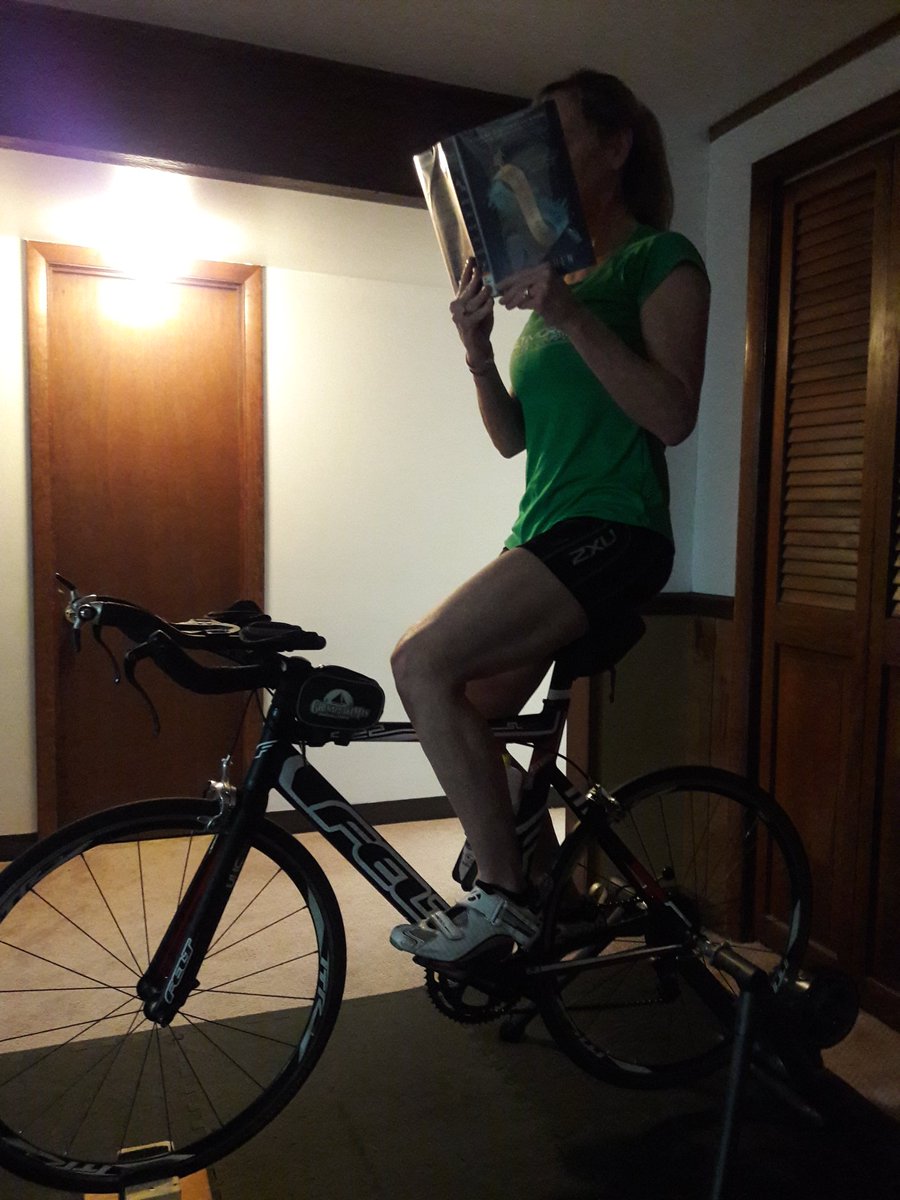 So whenever the weather or other obstacles—such as work or available daylight or childcare—would get in the way of riding outdoors, I’d hop on the bike trainer to get my cycling fix. In fact, I have known several triathletes who’ve trained almost exclusively on a bike trainer and have gone on to successfully complete their races, including those who were training for an Ironman distance triathlon, which includes a 112-mile bike ride.

While spinning indoors on a stationary bike is undoubtedly a good workout, the biggest benefit of using a bike trainer is that you can use your own bike; the same bike you use for riding outdoors. As healthyliving.azcentral.com notes, this is important because “spending time on your outdoor bike in an indoor setting also conditions you to the seat, which can be very different than the wider, cushier models often featured by stationary upright bikes. Your outdoor bike is fit exactly to your measurements to optimize your riding form and power. You can approximate a good fit on a stationary, upright bike, but it won’t be as precise as your own ride.”

When using a bike trainer, the back wheel of your bike is attached to a mount while your front wheel rests on a block. “You shift your gears just as you would out on the road to make your pedaling more challenging,” the site adds, which allows you to practice efficient shifting techniques and adjust the resistance as needed to practice strength and power intervals. A trainer is also small and easy to transport, which makes it an excellent option if you like to train when you travel or warm up on your bike before races.

An alternative to an indoor bike trainer is to use bike rollers, an option that still allows you to use your own bike but one that requires more balance and concentration.

According to cyclingtips.com.au, using rollers is an excellent way to perfect spinning technique because “once you get sloppy with your spinning, you’ll quickly become unstable and you’ll be forced to correct it.” Rollers will not, however, allow you to perform all-out sprints or power intervals while standing as this can knock you off balance.

With rollers, the faster you pedal, the more stable you are and, for some, the added concentration required to remain balanced makes rollers a less boring option when you are forced to train indoors. Also, as using rollers requires continuous perfect technique, the absence of any downtime makes for very efficient training.

If you’re unsure whether a trainer or rollers is the right indoor option for you, cyclingtips.com.au suggests going for a trainer if you want variable resistance workouts that require a lot of power, and rollers if you want to improve your spinning technique and base fitness.

A few weeks ago, my daughter and I flew to Florida to visit my parents who moved to The Villages in October to test their snowbird wings. We arrived to find them both happy, healthy and probably more fit than they’ve been in decades, both of them benefiting from a double-digit weight loss as a result of their more active lifestyle.

Their modest, single-story three-bedroom, two-bath home seemed both compact and spacious at the same time. With a sunny front porch and a shady backyard lanai, it is perfect for them; enough to comfortably host visitors, but not too much to take care of. Their neighbors are friendly and welcoming, and even their short walk to the dog park can easily become an hour-long event as there are so many people to stop and chat with along the way. The women of The Villages even joke that they can never leave the house without wearing a bra because just walking out the front door to get the mail means they are likely to bump into someone they know—or even someone they don’t know—who will be eager to stop and talk.

In fact, whether we were walking, bike riding, or zipping around in the golf cart, every person we passed smiled and said hello, lending the distinct feeling that The Villages may very well be one of the happiest places on earth. And, why not? For the most part, the people who live there have put their working days—and the frigid northern climes—behind them and now have the freedom to experience new things, meet new people and spend all of their sunny days doing exactly whatever they want to do. 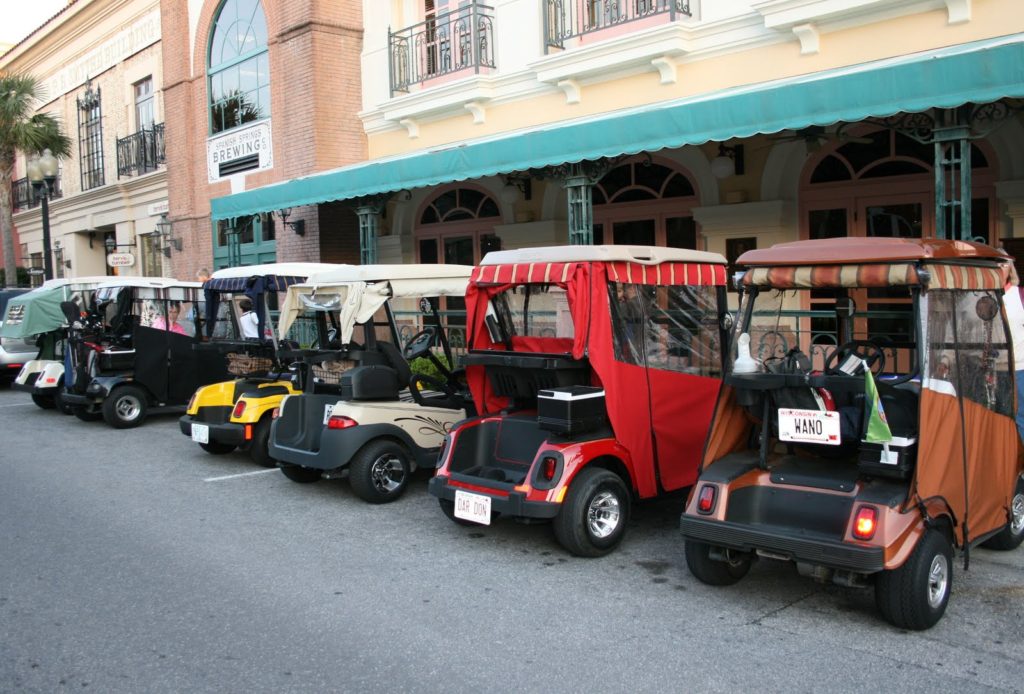 As a rule, in the three months since my parents fled to Florida, the temperature in The Villages has typically been about 30 degrees warmer than whatever the mercury is reading in Maryland. The day my daughter and I flew to Florida was the day Carroll County was experiencing an extreme but brief cold snap and the arrival of our first snowfall of the year. As such, the weather in The Villages on the day we arrived was predictably spring-like; perfect for riding bikes and playing paddleball in shorts and a t-shirt, and zipping up a hoodie if you weren’t.

On our first full day in The Villages we shared with my parents what is likely a typical day for them: coffee on the front porch, a morning walk to the dog park, and a bike ride to the pickleball courts where my daughter and I learned the game and engaged in two hours of vigorous play. Afterward, we went on a long bike ride/golf cart tour of the nearby villages and clubhouses, ending up at Edna’s on the Green just in time for happy hour.

As the name would suggest, Edna’s is a cozy little place nestled alongside a golf course and shaded by massive oak trees dripping with Spanish moss. Two food trucks—Edna’s southern-inspired Provisions & Vittles and Rita’s Cocina Mexicana—were stationed in front of the beer and wine bar. With a plate of chips and guac to share, we sipped our beverages while enjoying live acoustic guitar.

Live music is another thing The Villages has going for it. Any night of the week, at any of The Villages’ three vibrant town squares, free live music and dancing is available from 5-9. Drink specials are offered during the first hour, the zig-zagging queues to procure beverages reminiscent of those at nearby Disney World’s main attractions.

The Villages, however, is not a destination for night owls, as the entire place—including movies, restaurants, shops and entertainment—literally shuts down at 9 pm, even on New Year’s Eve!

Unbearably humid, subtropical temperatures in the summer and plenty of insects—thus necessitating the screened lanai’s and “birdcage” pool enclosures—are additional cons that may be a deterrent to some who are contemplating year-round living in Florida. Though the full-time transplants will argue that retreating into the air conditioning during summer’s peak heat is no different than—and actually preferable to—hibernating inside the heated indoors during the north’s freezing winters.

For my daughter and me, our last two days in The Villages brought perfect summer-like temperatures sans humidity; ideal for lounging by the pool with a good book while palm trees swayed overhead.

Not a bad way to spend a few days in January. I think I could get used to life in the Sunshine State.

Editor’s Note: This column is the second in a two-part series on The Villages, Florida